The phrase “in the moment” could have been invented for Joe. Colorful, focused and energetic, Joe’s qualities shine through in both his personal interactions as well as his accomplishments: He’s an IFMGA internationally certified guide, a professional drummer and a professional freeskier.   Joe possesses a unique ability to instantly shift his undivided attention to the task at hand. 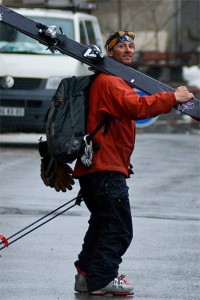 Before graduating from Colorado State University  with a BA in Music, he spent three summers in Yosemite, where he climbed more than two-dozen big walls. This experience took him to Peru in 2001, where he and his partner completed a major new route on The Sphinx. He’s climbed and skied throughout the Alps, Canada, Alaska and the lower 48, has appeared in major and minor ski films, Ford and Chevy commercials, competed in USSA Bumps and Aerials, Judged 5 X-games and was a member of the Copper Mountain Freeride Ski Team for five years. From an unforgiving urban rail, to a burly north face in the alps, Joe lives for skiing and will ski just about anywhere on anything with anyone just for the love of skiing. He is often heard quoting and living by his favorite quote, “no bad snow, only bad skiers” Doug Coombs

Joe has been guiding professionally for 13 years throughout the world, from the pristine granite alpine spires of Rocky Mountain National Park, the jagged peaks of the French Alps to the 6000 meter glaciated summits of the South American Andes. He’s spent a bunch of time working as a Heli guide in Alasksa,  but now prefers the winters in France working as a professional ski and mountain guide based in what he calls “the steep skiing mecca of the world” La Grave. Joe is dedicated to guiding and guide’s education, so also spends time working in the instructor pool of  the American Mountain Guides Association training the next generation of aspirant mountain guides.